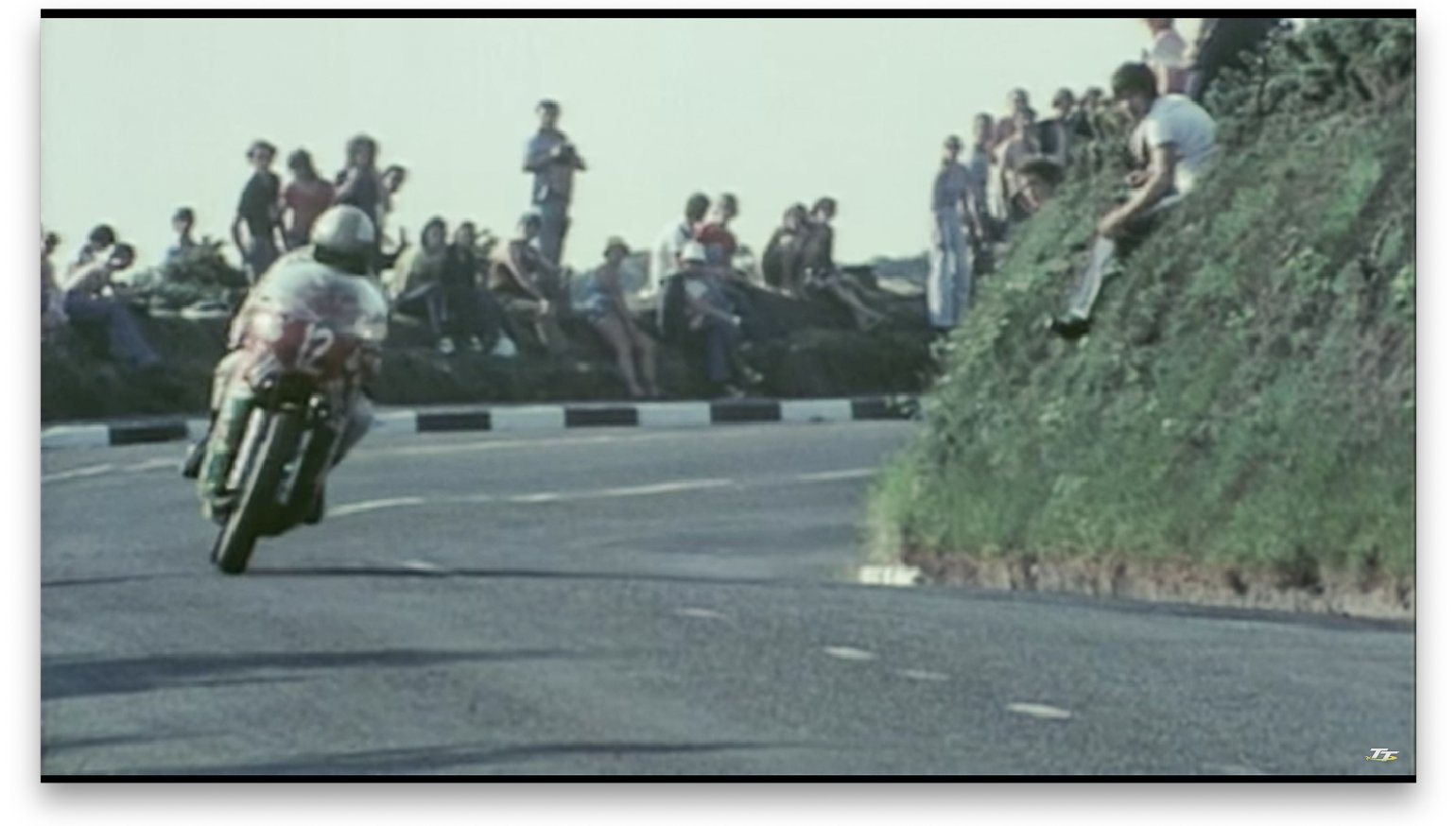 40 years ago, the epic comeback win that maybe saved the Isle of Man TT

Forty years ago, Mike Hailwood limped out of retirement to win the 1978 Isle of Man TT F1 race. The race is the stuff of legend. While Hailwood won 14 TTs, that win canonized Hailwood as the greatest road racer of all time. It may even have saved the entire TT.

Mike Hailwood was born in 1940. His father, Stan, had been a motorcycle racer and mechanic, but ended up buying the dealership where he worked, which was called King’s of Oxford. Stan grew King’s into a 10-store chain at a time when there were as many motorcycles as cars on UK roads. His house looked like Downton Abbey.

Mike began racing at 17. Back then, that was an early start; most of his rivals were working-class blokes, years older. It was not just his youth that set him apart. He’d been educated at private schools and his posh accent and well turned-out motorcycles sparked resentment. When Jim Redman gave Stan the nickname of "The Wallet," it stuck. But in short order it was Mike’s talent that set him apart, not daddy’s money.

In 1966, he returned to the Honda fold, winning a total of four more championships in the 250 and 350 classes. Over that period, he won 12 TTs, making him by far the most successful TT racer during the time when the TT was part of the World Championship.

Hailwood was not just a famous motorcycle racer. He was famous in absolute terms, known to riders and non-riders as "Mike the Bike." Honda paid him a salary of £50,000, the equivalent of about $1.25 million in today's terms. He lived in a posh flat near Heathrow, so he could easily fly off to races and tests around the world. London gossip columnists wrote about his parties, where motorcycle racers mixed with visiting jazz musicians and lovely "birds."

Honda desperately wanted to win the 500 cc championship, but although Hailwood won races, Ago prevailed in 1966 and 1967. Honda withdrew from the premier class in frustration, but paid Hailwood not to race for anyone else in World Championship events. 1967 was, therefore, Hailwood’s last year in motorcycle Grands Prix.

He continued ride in non-championship events, including the 1970 and 1971 Daytona 200 races, for BSA. But he was also interested in car racing. He’d shown some serious speed in a handful of Formula One races in the early 1960s and took it up again in 1969. He finished on the podium at Le Mans that year and won the European Formula 2 Championship in 1971.

Two hugely pivotal events marked Hailwood’s Formula One career. The first came in 1973 at the South African Grand Prix, when Hailwood spun and came to a stop on the track. Mike’s car was struck by Clay Regazzoni’s BRM, which burst into flames.

Hailwood jumped out of his car and ran to the Swiss driver’s aid. Mike had to step away momentarily when his own suit caught fire, but after a marshal sprayed him down with a fire extinguisher, he returned and helped pull Regazzoni to safety. For his heroic actions, Hailwood was presented with the George Medal, the UK’s second-highest award for civilian bravery.

The second incident was a crash in the 1974 German Grand Prix at Nurburgring, which severely damaged his right leg, bringing a promising Formula One racing career to a premature end. Hailwood retired to New Zealand.

Every hero needs a villain

While Mike was away racing cars, Grand Prix riders became increasingly vociferous about the dangers of the TT course. Beginning in 1973, top riders including Mike’s arch-rivals Agostini and Phil Read, boycotted the Isle of Man round of the FIM World Championship. After the 1976 TT, the FIM stripped the TT of its Grand Prix status.

In a sop to the TT organizers and British fans, the FIM created a new World Championship, Formula TT, in 1977. This new championship lasted until 1990, and in many ways served as the precursor to today’s SBK World Championship. In later years, Formula TT included as many as eight events in three classes, but for the first couple of years, the TTF1 title was decided by a single race, held at the Isle of Man TT.

The Manx tourism industry and race organizers had a powerful incentive to convince 60,000 race fans to keep attending the TT, even though it was no longer the British Grand Prix, no longer part of the real World Championship, and no longer attracting the biggest stars of the day. In a bid to hold fan interest, the organizers offered Phil Read £10,000 in start money.

Though Read had been one of the ringleaders of the TT boycott and was one of the riders the fans most blamed for the TT’s loss of status, he agreed to return and headline the 1977 TT. He arrived with a Suzuki RG500 Grand Prix bike for the Senior and a Honda RCB for the TTF1 race.

Read won the 1977 Senior on the Suzuki two-stroke at a speed of 107 mph, finally eclipsing a lap record set by Hailwood a decade earlier. But Read’s win in that first TTF1 race was controversial. The organizers decided to shorten the race to four laps, due to deteriorating weather conditions. After three laps, Roger Nicholls led by 22 seconds on a Ducati, but stopped to refuel. Read’s crew waved him on, and he was able to complete the race and win.

Fans were underwhelmed and many were openly resentful of Read, who they saw as a money-grubber who first sold out the TT’s World Championship status and then had the gall to return and take the Isle of Man’s money.

Meanwhile, back in New Zealand...

Mike Hailwood gingerly limped out of retirement. First he rode a vintage Manx Norton in a few classic races in Australia. He admitted to friends that he longed to return to the TT. The problem was, even Mike the Bike was unsure of his ability to handle the Mountain Course after a prolonged absence. So, he concocted a plan to get in a few laps during the late-summer Manx Grand Prix.

Peter Padgett offered to let Mike take a TZ750 out in practice, but there was a catch: the Manx GP was for amateurs only, so Hailwood was technically forbidden from signing up. And, Hailwood knew he’d have a target on his back if those ambitious amateurs recognized him.

So he and the Padgetts cooked up a cover story. They told everyone that Mike (in plain leathers with no name or sponsorship) was an American documentary filmmaker. And indeed, Mike did lap the course with a film camera mounted to the TZ and a Dictaphone microphone wired into his helmet. He had to stop a couple of times on his lap to reload the camera.

Mike found the TZ’s power frankly terrifying on such a fast course, but he took the film back to New Zealand to study over the winter. Encouraged by his results and some of the old feelings, he agreed to co-ride on a two-man team in the 1977 Castrol Six-Hour Race.

That race was a big deal — one of the highest-profile motorcycle races in Australia. He shared a Ducati 750SS; he needed a bike with a left-side shift because of that auto-racing injury. They didn’t win, but Hailwood dug the Duc. He described it as the kind of old-fashioned bike he could get on with.

Mike wanted a Ducati for the new TTF1 class. He knew that Roger Nicholls had nearly won the 1977 race on a Ducati prepared by Steve Wynne of Sports Motorcycles, a big Ducati dealership in Manchester. Sports Motorcycles certainly didn’t need any convincing, especially because Mike agreed to race for a very small fee. Wynne, working through the UK Ducati importer, placed an order over the winter for three specially made 900s. Mike’s had a left-side shift conversion.

Steve Wynne wanted to sell production bikes and he took every opportunity to tell motorcycle journalists that Mike’s bike was a modified 900SS. The truth — and what might or might not have become of the bike Mike rode — is a topic for a future story. For now, I’ll just say that the bikes arrived fairly late but there was time for Mike to try his out at Oulton Park and again at Donington before Sports Motorcycles shipped it to the Isle of Man in May, 1978.

Hailwood still wasn’t sure how things would go on the island, and briefly considered racing under the assumed name of Edgar Jessop. But in order to satisfy his personal sponsors, he had to enter under his own name. (It would have been impossible to remain anonymous the entire fortnight, anyway!)

“Hailwood’s back!” The news captured the imagination of fans and set up an immediate and intense rivalry. Fans overwhelmingly favored Mike — a genuine hero untainted by the TT boycott — over Read. The bookmakers, however, weren’t anywhere near as confident. Hailwood, who’d always seemed boyish as a motorcycle racer, wasn’t young any more. He was 38 — going on about 58. Tires and suspensions were different, and race bikes demanded more physical input from riders. Balding, limping, sweating; he didn’t really seem like Mike the Bike. Knowledgeable observers wondered why a man with so little to prove would risk so much.

During the race, Hailwood proved the oddsmakers wrong and and his legion of fans right. His very first lap on the Ducati was his fastest-ever lap of the TT course, a hair under 110 mph. He closed the gap on the Honda-mounted Read (who had started ahead of him) and fans around the course cheered wildly when they heard the announcement that Hailwood had passed Read on the road.

Read’s Honda broke down on the fifth lap. Hailwood won. Grown men, one of whom was Mike himself, wept as he crossed the finish line on Glencrutchery Road.

Fans had been skeptical of the TTF1 class in 1977, but it gained instant credibility in 1978. It’s no exaggeration to say Mike’s win breathed new life into the entire TT.

Mike’s other races that year, including the Senior, were anticlimactic, but so what? By dint of winning that one race, Mike was, technically, an FIM World Champion again. In 1979, Mike came one last time, winning the Senior on a Suzuki RG500. Then he truly did retire, this time to the small English town of Tanworth-in-Arden, with his wife and two young children.

Not how the story was supposed to end

It was raining in Warwickshire on the evening of March 23, 1981. That night, Mike left his house, driving his Rover car, to pick up an order of fish and chips. He smashed into a truck making a U-turn. Imagine Mike the Bike, of all people, dying in such a banal traffic accident.

Motor Sport magazine wrote, “He was and always will be the greatest motorcycle racer of all time. You cannot destroy a personality like Mike Hailwood by simply killing him.”

He will be on people’s minds next month on the Isle of Man, on the 40th anniversary of his most popular TT win.

Video: The fastest-ever lap at the Isle of Man TT Lance Oliver