My friend Dan’s pickup truck rattled to a stop near a dusty bungalow in Shadow Hills, a neighborhood on the north side of Los Angeles, tucked up under the 210 freeway, with an inexplicably rural/small-town vibe. The door of the two-car garage was open. Maybe that was part of why it didn’t feel like L.A. to me. Whoever lived here wasn’t afraid of prying eyes seeing a garage full of tools and bikes.

Alp shook my hand with less than total enthusiasm. I wasn’t sure whether he was shy or already worried that another journalist was probably going to get the technical details wrong. But he seemed to grudgingly accept that when your Triumph 650 goes 175 miles an hour — unfaired — strangers will show up, wanting to talk.

Alp Sungurtekin is 42 but doesn’t look it. He grew up in Turkey and Germany and studied industrial design in Istanbul, where he operated a tattoo studio. He moved to the United States in 2002 and got a job working for a naval architect.

That might not seem like a good prelude to building motorcycles, but the R&D department where he worked had a full fabrication workshop, where he taught himself how to make the things he designed. With new skills in hand, he began building and racing Triumphs at Southern California Timing Association events.

The prevailing dress and facial hair codes at SCTA events run somewhere on a spectrum between "Duck Dynasty" and ZZ Top. A lot of those old guys are running cars and bikes they’ve been developing for decades, since they were new. Only now they're running them in vintage classes.

So even if Alp hadn’t showed up with a leggy fashion model as his crew chief, people probably would’ve noticed the new "furriner." They may also have noticed that he seemed to have built the fastest stock-framed Triumph Thunderbird in history.

He became an SCTA tech inspector, which was a good way to see what everyone else had already tried. Over the years — and after making many, many land speed runs trying idea after idea — he formed his own notions of what a true land speed racing motorcycle should be. That tiny, tiny motorcycle was up on a work stand in the garage as I interviewed him.

“This is an A-PF 650-class machine,” he said. “A means special construction, P means pushrod, and F means fuel. It’s a top fuel motor, running on 90 to 100 percent nitromethane.”

"Special construction" means it’s not a factory frame. Alp designed and fabricated the chassis himself, from chromoly tubing. It looks a bit like a vintage drag bike; too short, too light, and too lacking in rear suspension to fit in as a land speed racer. The rear hard-tail loop is as short as possible, with a member that actually penetrates the gearbox, which keeps the final drive short, too.

It’s a pre-unit motor, but part of his design concept was to join the cases and gearbox with a pair of massive aluminum plates. That allows the combined motor and tranny to be used as a stressed member in an otherwise-slight main loop. The motor’s actually hanging off that spine, more like a modern bike than a classic Triumph.

The fork legs are NOS Ceriani items from the 1970s (he thought, maybe from one of the Aermacchi/Harley-Davidson dirt bikes) with Tomaselli clip-ons and Pingel controls. Rear axle plates are adjustable for both height and wheelbase. The RC Component wheel is shod with a Goodyear drag slick.

The motor’s built up on Thunder Engineering pattern cases. The cylinder block is a 750 cc pattern from Triples Rule, sleeved back down to 650 cc with special sleeves from Northwest Sleeve. The head began life as a 1964 alloy Triumph item, fed by 1 3/8-inch Amals.

The carbs aren’t the largest ones available, but the jets needed for nitro are huge. Basically, if you could see into the ports when a bike like this is running, you’d see big droplets, not finely atomized fuel. Since nitro also tends to quickly dissolve into engine oil, Alp’s happy that Klotz is a sponsor; he changes the oil after every run.

“It’s not a secret,” Alp told me when I asked questions about those things, “but I don’t talk about it.”

He allowed that the pistons were nothing special: Hepolite items with some hand-shaping. Valves were 1.66-inch Kibblewhites. “Standard oversized Bonneville valves. They’re, like, $28 a piece,” he said. A belt primary drives what he says is a stock tranny.

Nitro burns slowly, so it doesn’t need to spin over 7,400 rpm. You can’t really run a top fuel motor on a dyno, but Alp’s has to be making at least 150 horsepower.

He had planned to run it at Bonneville, but the salt was lousy all last year. So he broke it in at the Mojave Mile, on an airport runway, where it obliterated the SCTA record by 25 mph.

“People who are 50, 60 years old have been doing this for years, and they move the record up one or two miles an hour,” he told me. “You can imagine that I show up, with my funny accent...” His voice trailed off, but then he added, “There was this one guy, a BSA racer, with a streamliner. He made a post listing about 10 things that are wrong with my bike: the bore/stroke ratio, the angle of the inlet tracts... I told him, ‘Can you imagine if I did it right?’”

Experts said his rigid frame would have traction problems at El Mirage, because it’s a dry lake, but it went even faster there: 175.625 mph. Fast enough to set the record in the 1000 cc class too, if he cared to enter it.

To put this in perspective, a couple of years ago, Shunji Yokokawa set an official record for the fastest production 600 cc motorcycle. That’s one of Honda’s top R&D engineers, on a Honda CBR600RR. He went 170.828. Alp went faster than that, on a motorcycle with a cylinder head — among other components — older than he is.

This video makes record-setting look easy, although the reason so many of those SCTA racers are literally grizzled veterans is that it usually takes a long time to master this seemingly simple discipline.

Key sponsors, like Lowbrow Customs, help to defray his costs and, as word of his record-breaking spreads, Alp pretty much always has a customer project or two in the garage, as well. So although he still does a bit of custom design work outside the motorcycle world, most of his time’s spent building customer bikes or working on his own projects.

For his next trick, Alp wants to break into the 200 Club on a partial streamliner powered by one of his 650 cc pushrod twins. That would make him the first guy ever to go that fast on a "sit-on" motorcycle (as opposed to a full streamliner). He’s already sketched out the bodywork, which will be all aluminum he plans to hand-form himself.

I made him promise to call me when that bike’s ready for a record attempt, so hopefully you’ll read all about it here.

How to get to Bonneville: Interview with Jack Broomall TeamZilla 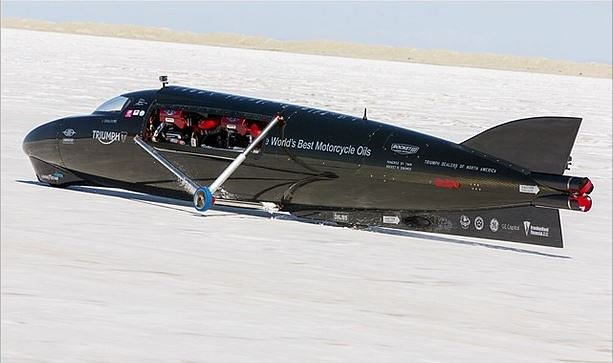