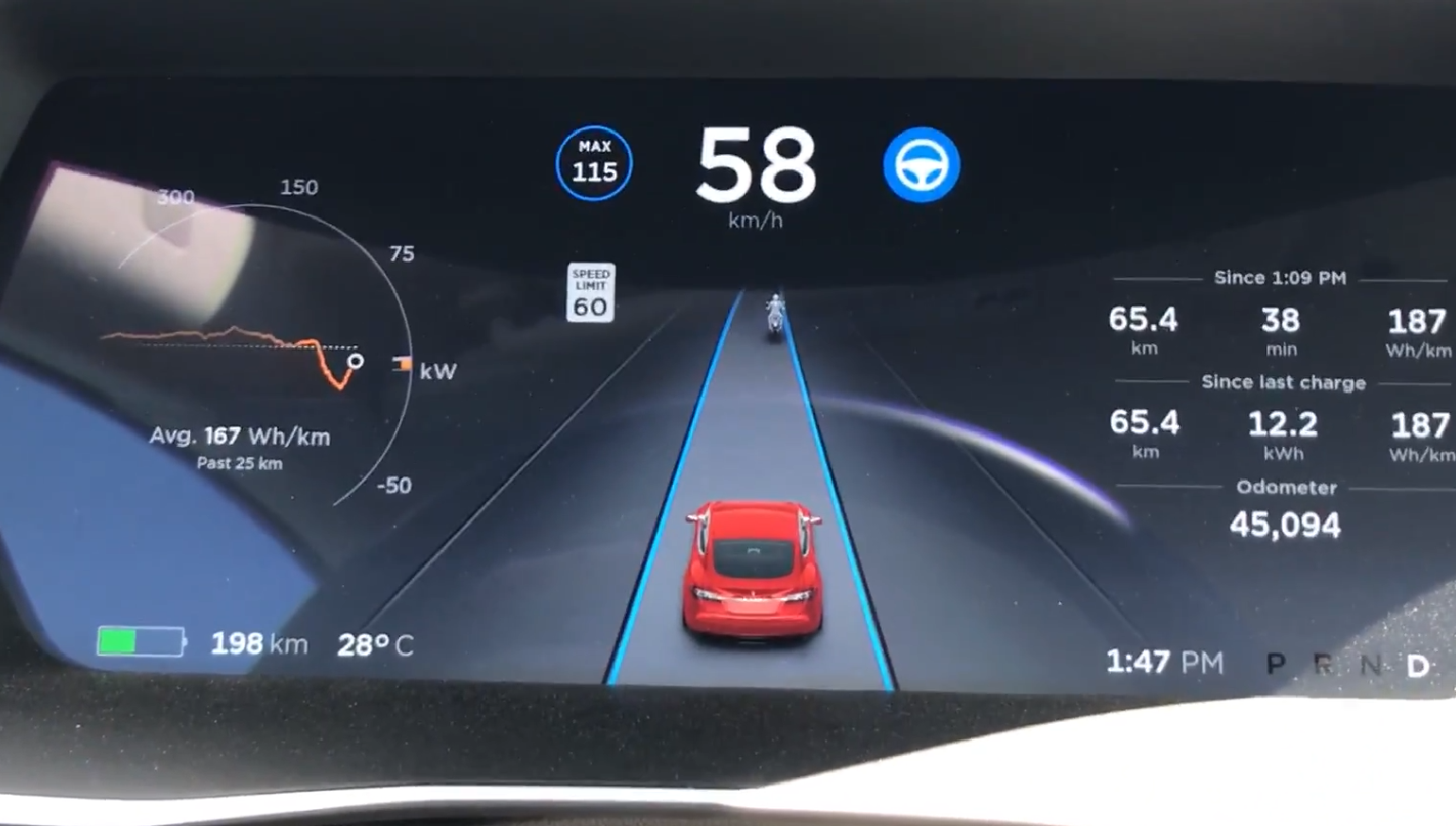 In July 2016, a Tesla Model S in Norway rear-ended a motorcyclist while in Autopilot mode. The car failed to sense the vehicle ahead, and the driver failed to remain vigilant, despite Tesla’s warnings to do so while using Autopilot. The rider was seriously injured, but survived.

In the two years since this incident, how far have advanced driver assistance systems (ADAS) come in sharing the road with motorcycles?

Not far enough, according to a study by the Netherlands Vehicle Authority, RDW. While ADAS can refer to any driver-assistance technology, from automatic emergency braking to full-on autonomous driving, RDW focused on a specific function that played a role in the Norway collision. Their research indicates that although cars equipped with adaptive cruise control (ACC) systems can detect motorcycles, riders at the edges of the lane could disappear from the car’s sensors. When activated, ACC is supposed to use the car’s sensors to detect other vehicles, automatically adapting to the flow of traffic using brakes and acceleration without input from the driver. But if the sensors miss a motorcycle, for example, the ACC could behave as though the road was empty ahead. Add a distracted or inattentive driver, and there’s nothing to prevent a collision if both the driver and the ACC assume the other was watching.

Ideally, ACC-equipped vehicles should be able to detect motorcycles like in the example below. But the real world isn't ideal.

In a series of tests, RDW used different combinations of cars, motorcycles, speeds, and lane positions to locate blind spots in the sensors feeding data to the ACC. The RDW test fleet models included a Jeep Grand Cherokee, a Hyundai Ioniq Electric, a Skoda Octavia Combi, a Volvo V40, a VW Golf Variant, and a Tesla Model S. To represent motorcycles, RDW used a Suzuki GSX-S1000F, a Ducati 900SS, a Triumph Tiger 1050, a Yamaha MT-09 Tracer, and a Suzuki V-Strom 650A. Presumably, smaller motorcycles would be even harder for sensors to spot, but the testers chose bikes that could quickly get out of the way while testing at higher speeds. The bikes were stripped of any luggage, like hard bags, that might influence the tests.

A series of control runs was also conducted, which simply replaced the motorcycles with other cars. The study's authors were quick to disclose that they needed more tests to make a statistically significant claim, but the repeated trials with their variety of vehicles, speeds, and testing scenarios revealed troubling blind spots in ACC systems. Drivers needed to take control in multiple tests to maintain a safe distance. Again, these tests were limited in their scope and number, but even this cursory look at the issue found that all ACC systems studied were worse at spotting motorcycles straying three feet, 11 inches or more from the center line than they were at spotting cars. Just for reference, the standard lane width for U.S. highways (where ACC systems are primarily used in this country) is 12 feet. Often, the mid-lane position not the best place to ride, and bikes also pass through the ACC’s blind spots while changing lanes. In short, there are plenty of situations in which a motorcyclist might ride where a car’s sensors can miss it. What happens after that is up to the driver, and that’s a problem.

What really makes the ACC situation dangerous is that many drivers misunderstand the technologies that assist them. Automatically adapting to traffic doesn’t mean the driver can assume his input isn’t needed to drive safely. The Volvo V40’s owner’s manual, for example, even warns that “Small vehicles, such as motorcycles, or vehicles not driving in the center of the lane may remain undetected.” But most owners don’t even read their manuals, leading to dangerous assumptions about their vehicle’s abilities. On top of all this, ACC is just one kind of advanced ADAS function. Those same sensors can be used for other driver aids, like automatic lane changes or even fully automated driving, like Tesla’s Autopilot.

These issues need to be resolved, and quickly. ADAS shortcomings affect all road users, and driver-assisting technologies are only going to spread. In an agreement with the NHTSA, manufacturers representing 99 percent of cars sold in the United States have voluntarily pledged to “equip virtually all new passenger vehicles by September 1, 2022, with a low-speed automatic emergency braking system.” The intentions sound good, but if the RDW tests show us anything, it’s that motorcycles need to be a part of ADAS testing from the beginning if safety is truly the goal.