Prepare mentally for the three kinds of spring riding hazards

At the northern latitudes, motorcycles pop up on the road on the first nice day like a hatch of mayflies: one day none, the next they're everywhere. And that phenomenon explains why riders need to be extra smart in the spring.

There are special hazards to springtime riding that require us to be mentally prepared. They easily break down into three categories: hazards from the environment, from those around us, and from within.

Spring hazard: It's a messy world we ride in

Spring is messy. In the city, the freeze-thaw cycle has opened holes in heavily used streets. In the country, mud and gravel can easily get washed or dragged onto the road surface and, worse yet, some jurisdictions may have spread sand or cinders in some areas for traction in the snow. It takes a lot of spring showers to clean up all this. Meanwhile, we need to anticipate these problems and leave ourselves a safety margin.

Expect a higher likelihood of sand, gravel or cinders at intersections or steep slopes. In farming country, watch for unpaved roads or driveways where mud and gravel might be tracked onto the surface. In the mountains, watch for snowmelt sending a slick stream of water across the road. In low-lying areas, be prepared for the possibility of mud or debris washed across the pavement by flooding. If you anticipate these problems and they do not materialize, no worries. If you don't and they do pop up, could be big worries.

In some areas, drivers haven't seen a motorcyle on the road for months. They've been trained that motorcycles don't exist. In the state of semi-awareness most people operate in, that's a dangerous situation for us.

When a driver utters those infamous six words after a crash ("Officer, I didn't see the motorcycle"), he or she is telling the truth, on the most basic level. Researchers who have studied the phenomenon call it "inattentional blindness." In one of the most famous studies, test subjects were told to count the number of passes in a video of people passing around a basketball. When a person in a gorilla suit walked through the scene, they didn't notice. They weren't looking for gorillas. Many swore it was impossible that they missed something that obvious, until they watched the video a second time.

Test subjects weren't looking for gorillas and car drivers in the north in the spring aren't looking for motorcycles. The image of you and your motorcycle may hit their eyes, but it does not register in their brains because it's not the car or truck they're looking for. Effectively, they don't see you.

Riding as if you're invisible is a good strategy all year around. In spring, that's doubly so.

I never completely stop riding during the winter, but the weather means I ride less frequently and for shorter distances. My skills in March are never going to be as sharp as they are in September, but the demands of riding are the same, or even higher, because of the hazards already mentioned. See our spring tuneup tips for some ways to help get yourself back in the groove.

Rusty skills are not the only way we can get ourselves in trouble. Impatience is another hazard. A motorcycle that's been sitting neglected needs a good once-over, no matter how eager you are to go riding on that first nice day. Pay particular attention to tires and brakes. Don't be so impatient to get on the road that you find yourself in an emergency situation with spongy brakes and a front tire that's five psi low.

Impatience to get back into the social aspect of motorcycling is also understandable. But if your skills are rusty, so are your fellow riders' skills, and group rides compound errors, rather than minimize them.

Patience is really the common theme. There's a nice long riding season ahead — unless you screw up badly now and hurt yourself. As eager as you may be to get out on the road and once again feel that fun sensation of riding a wave of torque out of a curve while smartly leaned over, just remember: that curve may have gravel strewn across it, a driver who hasn't seen a motorcycle in four months may be pulling out in front of you, and your brake hand hasn't practiced threshold braking in a long time.

Ride to live, live to ride another day. 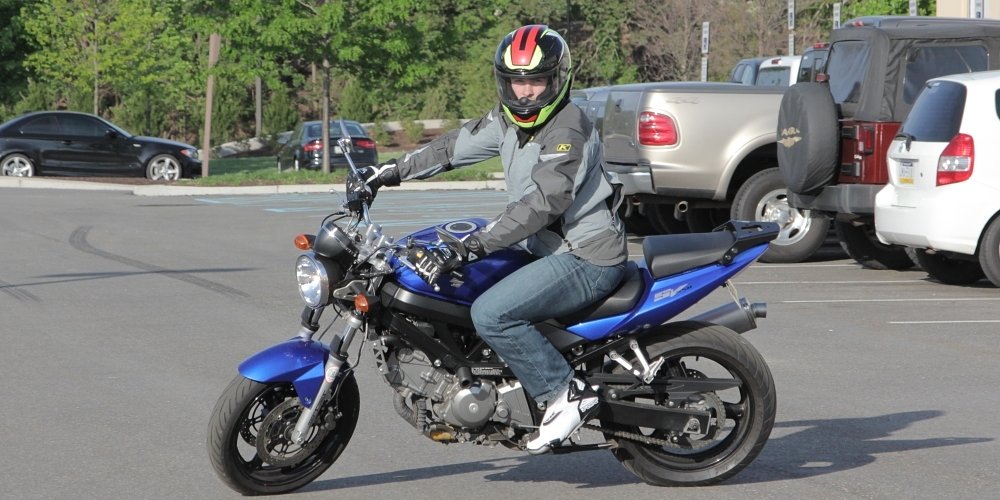 Dusting off the cobwebs: Simple drills for sharper skills after a winter layoff Filip Lewicki