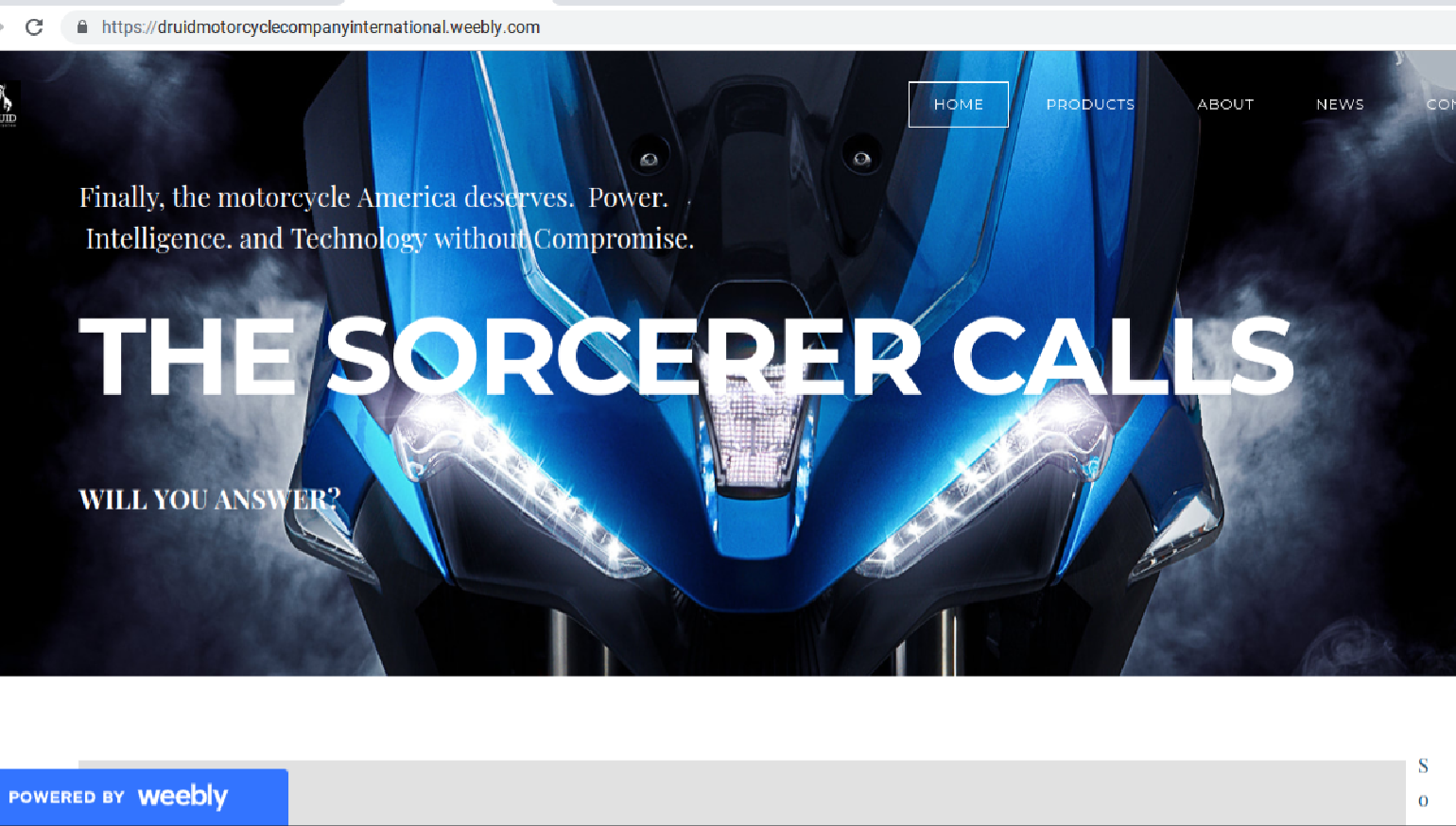 Someone is playing a hoax on motorcyclists, but why?

“There are three kinds of lies,” Mark Twain once wrote. “Lies, damned lies, and statistics.” If he’d lived 120 years later, he probably would have created a fourth category for a spam email that arrived in my inbox Friday afternoon, breaking the story of the “all-new, all-American DRUID SORCERER Hybrid superbike.”

Here’s the full text of the email and appended press release with my foot notes added (a far from exhaustive list of potential red flags).

DRUID IS THE LEADING NAME IN A.I. POWERED MOTORCYCLING

Los Angeles, July 1, 2019 – The Internet of Things comes to motorcycles! Testing and development of the DRUID MOTORCYCLES Sorcerer™ Hybrid, and Sorcerer™ XEV all electric motorcycle platform is a total success, delivering bike to bike and bike to cloud connectivity.Note 8

The Sorcerer Hybrid uses a state-of-the-art 14 kWh battery, AC electric motor and a 2 cylinder gas motor to deliver 230 tire-shredding horsepower, and a range of 200 miles. The Druid Prophet A.I. system continuously reads ride data in real time, and uses powerful machine learning algorithms to adjust the the bike for weather, hills and riding style, and to maximize performance. The Prophet platform was developed together with engineers and mathematicians from Trencin Polytechnik Intitut,Note 10 a leading European university in the area of A.I. and space science.

“Druid is our dream of powerful and intelligent motorcycling come true.” says founder and lead designer Milan Svoboda. “I came to America years ago with only a vision. Today those ideas take shape and form the beginning of a new reality.”

The Druid Sorcerer Hybrid and Sorcerer XEV will be available for pre-order this MayNote 11 starting at a launch event in Austin, Texas. VISIT DRUID MOTORCYCLES for updates.

Founded by Milan Svoboda after a lifetime of aerospace design and beekeeping,Note 12 Druid brings together a multidisciplinary team of engineers and scientists with the goal of transforming the motorcycle. A division of the GMX Group, the Sorcerer is the first of many new products to be launched over the next four years to bring radical mobility to the world.

The press release included five photos, including one "on track" shot that was an obvious Photoshop job, three photos of sporty commuter bikes, and one "undressed" rendering of a (barely, at first glance) plausible gas-electric hybrid motorcycle.

The clearest photo was one labeled SorcererHybrid, a bike that they claimed produced 230 “tire-shredding” horsepower. It's true that 230 horsepower would obviously shred the small rear tire on that bike, to say nothing of the fact that you’d need to be a sorcerer to stop a 230-horsepower motorcycle with that small, single, front brake disc and twin-pot caliper.

One photo labelled Druid Recharge shows an obviously ICE motorcycle, with a large power cable snaking in from the edge of the frame plugged into... the license plate holder.

The undressed rendering is another obvious Photoshop job, and there are another handful of “product photos” on the Druid website that belie the claims made in the press release and web site copy.

One sweet claim was that the frame would be 3D-printed out of graphene. I had trouble believing that the first graphene frame was gonna come from some company I’d never heard of, but considering that raw graphene for 3D printing currently costs about a dollar a gram, I suppose that would explain the absence of any references to Druid motorcycle prices. If you have to ask, you can’t afford it, I guess.

I mean, the initial e-mail stank of bullshit even before I’d expanded the photos, and the photos themselves were obviously not as described. Yet by Saturday afternoon, I was dismayed to see that Rideapart, ADVrider, and MCN (along with other foreign-language sites) had all reported this story as news. It seems some of them received the news e-mail just now, as I did, while others got it months ago.

OK, then. I guess I was the only person who bothered doing a reverse-image search to find that Druid’s 230-horsepower Sorcerer hybrid motorcycle is actually a 35-horsepower Zontes 310X.

One final, beautiful note to this concerto of lies is that Druid has a LinkedIn page, where there’s a photo showing a bunch of guys in lab coats, looking at some weird science-y stuff on a table. The caption reads, “Meeting at Druid's A.I. studio today.” Now, not only are all the guys in the photo too old for that to be plausible, the photo itself is obviously old. The equipment in the photo is old. A Google reverse-image search confirms that it is a photo of a decades-old meeting of U.S. and Soviet nuclear scientists.

So who's doing this and why?

Against my better instincts, I responded to that e-mail with a request to chat with the principals. If they have an explanation as to what they hoped to achieve with this elaborate hoax, I’ll let you know.

The one answer they could give me to justify it would be, “We wanted to show motorcyclists how dangerous it is to believe everything you read.”

In my little world of motorcycle websites, everyone wants to be first, but this was an example of editors believing a bunch of obvious hooey and rushing it online. C’mon, you guys! You're better than that. Aren’t you?