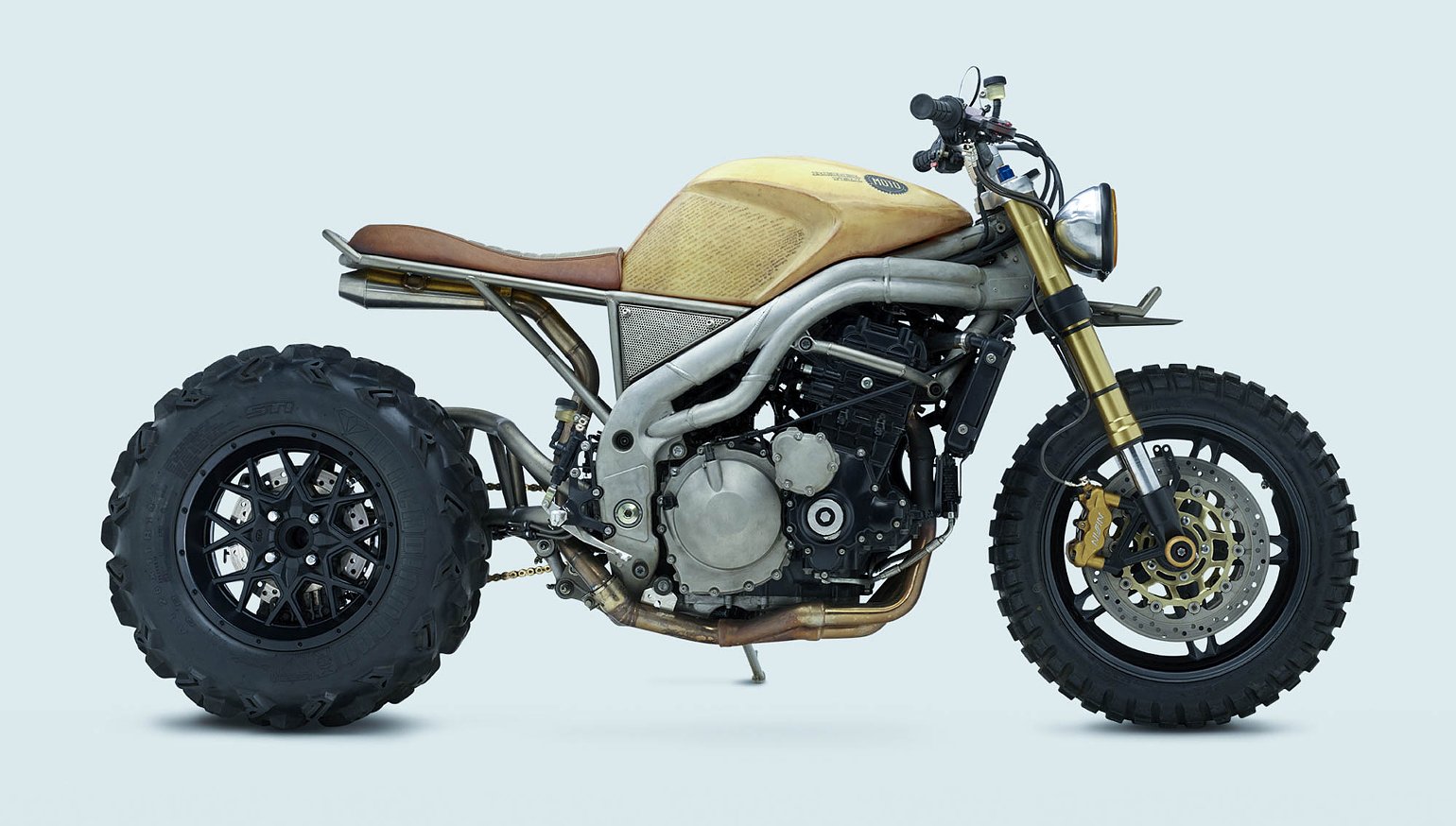 How a trend ends: An ATV tire on a Speed Triple

Remember those? A little over a decade ago, there was a time when chopper shows were proliferating like hormone-addled spiders on cable TV and lots of people suddenly got the idea that taking out a home-equity loan to buy some ridiculous stuff was a brilliant notion, because everyone knew house prices were going to keep going up 20 percent a year for-damn-near-ever. The problem (aside from the housing bubble implosion) was that each custom motorcycle builder had to outdo the other, so prices quickly soared over $30,000 and front ends stretched into the next ZIP code. After you rode the thing a few times to Bike Night to prove that yours was longer than the other guys’, there wasn’t much else to do with it.

So now, when they’ve probably been sitting unstarted for five years in the garage, some people are trying to unload them.

Customization trends seem to go that way, and this bike may well mark the beginning of the end of the latest trend. It’s a 2007 Triumph Speed Triple customized by Classified Moto in Richmond, Virginia. And that, my friends, is an ATV rear tire bolted up to a custom-made single-sided swingarm. Why? Because that’s the final stage of customization trends.

It plays out this way. Somebody does something that looks fresh. In this case, once everyone got tired of making café racers out of 1970s Hondas, someone made a “scrambler.” We started seeing more and more street bikes wearing tires with blocky tread, and it quickly pushed into the mass production world, with bikes like the Yamaha SCR950. Mass production has to play it safe. Customizers have to push the envelope. So that leads to the thinking that if blocky tread is good, fatter and blockier tires are better and, finally, a big, honking ATV tire that makes a sweet-handling bike a slower, butt-pounding pain to ride has got to be better yet.

That’s usually when the trend is nearly played out. When the chopper is so long you can’t do a U-turn using half the Quaker Steak & Lube parking lot at Bike Night. When every custom shop has built a slammed custom bagger with a 32-inch front wheel and suddenly everyone realizes that going any bigger will make it look like you're riding your childhood Big Wheel tricycle. When you see an ATV tire on the back of a Speed Triple. That’s when you know the trend has just about exhausted itself and it’s time to expect the next “something fresh” that will eventually be taken to an extreme.

Look, I’m not picking on John Ryland at Classified Moto. He's doing what he has to do as a customizer, trying things and taking chances. His bike, called “Frank,” as in Frankenstein, has a lot of creative touches in it, like the finish on the fuel tank with handwritten text. A lot of work went into building that swingarm. Frank is at Sturgis now, if you happen to be in town and want to check it out. It’s being given away by Rebel Yell bourbon, if you want to own it.

It’s interesting to look at, for a minute or two. I just wouldn’t want to ride it. And I suspect it represents just about the end of this trend.

Five reasons you should build a motorcycle Lemmy

Is this the strangest homebrew motorcycle yet? Lance Oliver