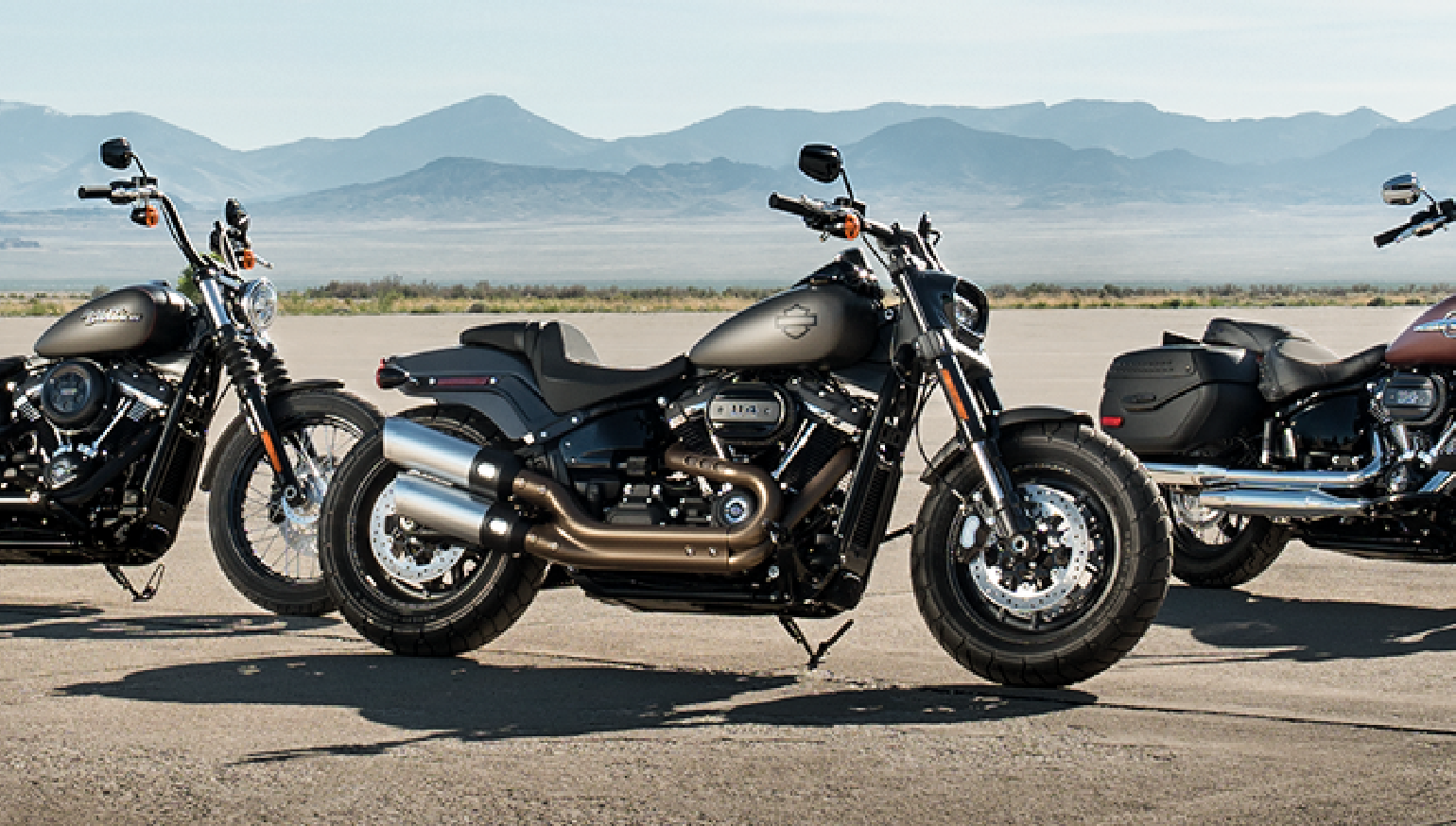 I have a notebook jammed with notes. Jammed.

So we’re gonna take two articles to cover this rather prolific model launch, because Harley drowned me in facts, figures, updates, and information about their new line. (There are eight new models, not counting engine variations.) This initial piece is about big family-wide changes, and I’m going to follow it up with another piece that has some model-specific information, so we can get into the minutiae.

Softail and Dyna are history

You read that right — they’re actually both dead and gone. The Softail, with its twin undertail pull-shocks and the Dyna with its exposed conventional units straddling the rear fender strut are both gone. The Softail name now encompasses previous Dyna and Softail models, but the name is the only part of the Softail that will be familiar to fans of the brand.

The new Softail frames are suspended in the rear via a monoshock that’s hidden beneath the seat. There are all sorts of facts and figures and claims over stiffness increases, but the upshot is that the frame is much, much stiffer.

Harley claims the new frame “maintains the pure, classic lines of a hardtail frame.” I disagree most heartily. The old Softail didn’t ever do a great job of that to my eyes, and the new one looks even less like a hardtail. Here’s the good news: It doesn’t matter. These bikes aren’t rigids.

Who gives a hoot if there is no resemblance between the two? For those of you who are going to moan and groan about traditionalism, you’ll remember that Bill Davis’ original Softail design was set up very, very similarly to this one.

Two separate swingarms are used on these bikes, based on model. One is for narrower tires and one is for wider rear rubber. I'm still not sure if I'm a Softail customer, just based on the attempt to mimic a hardtail frame, but the fact that the suspension has real rear-wheel travel numbers sure pushes me in that direction. Maybe I'm old-fashioned, but I think suspension is cool, and sacrifices shouldn't be made to hide it.

Long story short: Don’t freak out when you see your favorite Dyna model now listed as a Softail.

The frames alone lost weight: 13 pounds disappeared on the wide chassis and the narrow chassis shed 18. The cuts did not stop at the frame, though. Most of the bikes lost at least 30 pounds. (Models based on the old Softails lost quite a bit of weight. Beating weight off a Dyna was a little harder, since they’re leaner animals to start with; the Low Rider lost five pounds and the Street Bob dropped 17.)

Cast and forged aluminum pieces were used in many places on the new Softails. For instance, items like the fender struts and triple clamps helped shed some of the dead weight of steel, and the reduction is noticeable when you hammer the throttle, when you’re mid-corner, and even when you tip the bikes up off the jiffy stand. Remember, weight loss helps not just speed, but also improves braking and handling, too. I think this is the first time I’ve ever heard of The Motor Company counting calories, and I like it.

These bikes are now corner-friendly

Lean angle has been increased across the board. The hot rod of the group, the Fat Bob, picked up a degree of lean angle on each side (now 32 left and 31 right), and the Softail Slim, for instance, changed from 24.9 degrees left and 24 right to 27.4 degrees on both sides.

H-D let a few of us bike writers ride 2017 and 2018 models back-to-back around Blackhawk Farms, a test track in Illinois that is very flat and narrow. I rode the new Harleys as hard as I felt anyone who bought one of these bikes would want to. I could get the new bikes to scrape parts, but I had to beat the tar out of them to do it; well past what the average street rider would normally be doing. The bikes are now fun to ride. I didn’t push the lay-back-and-cruise bikes (Heritage, Slim) terribly hard, but on the hot-rod models (a Fat Bob and Street Bob), I wailed on ‘em. It was nice to have footpeg feelers ("hero blobs") warning me that I was coming up on “too much.” In the past, I have ruined floorboards and exhaust shields alike simply because I enjoy biting off as much lean angle as I can chew. I always feel awful when I scrape up a nice item like a chrome shield that’s definitely not made to be replaced. Good job, Harley.

Part of the improvement has to do with the primary. It was actually rotated five degrees upwards at the rear to lift the primary, allowing more cornering clearance. Racers have been lifting their transmissions since before World War II to achieve the same effect. It’s cool to see an old idea put into use again.

The other part of this lean angle increase is due to suspension. That new monoshock actually comes in two different heights, depending on model. The Heritage and Fat Bob offer 4.44 inches of vertical wheel travel, and the models with “short” suspension feature 3.4 inches of wheel travel. All models now have easily adjustable hydraulic suspension. Some models are wrench-adjustable under the seat, some are wrench-adjustable hydraulic under the seat, and still other models have a tool-less knob hanging out in the breeze on the right side. How many people do you think actually ever adjusted their shocks on the old Softail for changing loads? Answer: next to none. It was too much of a hassle. Proper preload is non-negotiable, and now riders can dial it in without crawling around under the bike. The front suspension has been overhauled, too, utilizing the same technology we saw in the Touring bikes last year: Showa’s Dual Bending Valve fork. When describing the DBV, Harley says basically the same thing Showa does: The fork can now be tuned to provide cartridge-like performance, but the price is kept down, compared to cartridge items. I now have significant mileage on this suspension from both the Touring models and now the new Softails. The suspension is actually good. Not “good for a Harley.” It’s just good. Because the suspension is no longer too-soft junk and preload can be changed without shop towels and a flashlight, handling improves.

Hustling these bikes around that track was honest-to-goodness unbridled fun. I rode a Twin Cam dresser to Milwaukee for this event. On the way home, I hit the Triple Nickel in Ohio. I had fun on it, but I couldn’t get that same feeling the Street Bob gave me in Turn 4. The real-world gains are immediately evident.

They are also fast

The Milwaukee-Eight engine showed up in these bikes, which is in no way a surprise. Power is still prodigious from the mill. (If you didn’t catch our article on that engine when it rolled out, it’s worth glancing at to get some of the tech specs.)

The engines in the Softies, like the Twin Cam before it, are hard-mounted to the frames. Because a hard-mounted engine doesn’t shake around on the isolating mounts like a rubber-mounted bike, the frame and tanks could be fit more closely to the engine to minimize visible space around the powerplant. The chassis should also transmit power to the transmission more efficiently, and another happy side effect is that the engine serves to help stiffen the chassis even further. (The engine is not a stressed member, but it does lend rigidity to the package.)

To counter the vibration that comes along with a solid-mounted narrow-angle V-twin engine, the Softy engine gets a pair of gear-driven internal counterbalancers fore and aft on the primary side of the engine. The bikes are plenty smooth; there’s just enough rumble coming through the handlebars to let you know you’re on a motorcycle, by God.

Power increased, as did the power-to-weight ratio. I don’t have lap times and drag strip slips, but they are really quick, if my derriere dyno is still calibrated correctly. A rider on a Fat Bob who knows what he’s doing should have a fighting chance against someone on a quicker or lighter bike, especially if the ride involves tight hairpins and elevation changes, where it can be hard to keep a peakier engine on the boil.

Matt King, U.S. Endemic PR Lead for Harley, mentioned that CVO models for 2018 are packing a new 117-inch engine. That engine will have the same 4.5-inch stroke as the 114. The extra three inches will come from larger slugs 'n' jugs. If you just know you want mo' powah right off the bat, you're in luck. Harley's Screamin' Eagle parts are apparently capable of eking another 30 ponies from the 117.

Many items are now standard

Yes, Softail prices have gone north. Some models went up a little; some went up more than a little. That having been said, that increased price comes with some amenities. Daymaker Signature LED Headlamps are all new and come standard on every model. (Some are shared, and some are model-specific.)

Keyless ignition and security are also standard. The only thing you need a key for now is the neck lock, should you choose to use it. The final addition is nothing to sniff at: a USB charging port right near the headstock. ABS is still optional, which is the best of both worlds to me. Buy it if you want, don't if you don't.

How I liked them

Ah, here’s the meat and potatoes you wanted. I rode a lot of models. This new chassis certainly has some variation within it. The range as a whole pleased me greatly. They’re lighter and nimbler and faster. That said, there are notable differences between the models, which I’ll hash out in the next article. One overarching negative thought I had about the whole thing is minor, but it won't go away: I do really wish they had chosen a new model name. I know "Softail" carries great cachet, but this carryover of the names is just confusing. "Do you have a Dyna Low Rider, or a Softail Low Rider?" Grizzled Harley vets are going to shake their heads, and rookies to the brand are just going to be confused as they learn their history. It's not a major mistake, but I still maintain that they should have started over — and I realize Marketing would have had a collective aneurysm.

As a whole, I think the line is excellent. I have some individual gripes about a model here or there, but I am pretty proud of Harley-Davidson. They did a wonderful job updating this model line. They look, feel, and ride like all-new bikes and they are. I talked to so many members of their staff, and all were eagerly awaiting opinions from those of us who rode them. Clearly there were a lot of hours poured into this project, and it shows.

If there’s one thing you take away from this article, let it be this. I don’t care if you like Harley, hate ‘em, or are indifferent or have no experience with them. In order to discuss these new bikes, you need to go ride them. Go see a dealer. Most are pretty friendly and like putting asses into seats. These bikes are all new, despite the looks that are convincingly similar. If you like cruisers, I suspect you’ll find these among the very best you’ve ever ridden.